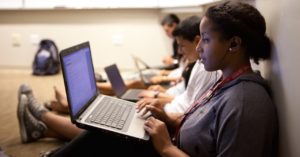 Earlier this week, First Daughter Ivanka Trump announced that the President will direct the Department of Education to invest $200 million of grant funding annually to expand access to STEM and computer science education in public schools. Tech companies followed immediately with an additional $300 million pledge to do the same. As an advocate for STEM and CS education, I’m thrilled that there is a commitment coming from the highest levels of the federal government. But given this administration’s track record on race, poverty, education, and human rights, the announcement should be viewed with skepticism. Read more.