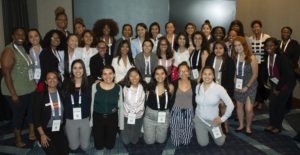 At a Philadelphia computer corporation lab in 1953, someone told Grace Hopper, “No.”

Hopper, a Navy veteran who wrote the manual for the first U.S. electromechanical computer, suggested writing programs using words instead of mathematical symbols, but was told her simpler and more accessible idea would never work. In 1956, her team operated FLOW-MATIC, the world’s first programming language to use word commands.

Since 1994, the Grace Hopper Celebration has honored her legacy. Thousands gathered in Houston last week at what’s now become “the world’s largest gathering of women technologists” to network, build relationships, and collaborate among people who, like Hopper, have had their talent questioned and their ideas dismissed, simply because they are women. Read more.