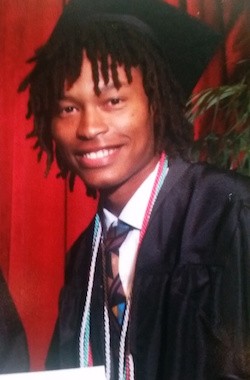 Haki Daniels’ application to the inaugural Summer Math and Science Honors Academy        (SMASH) at UCLA caught my attention. I recognized Haki’s leadership potential immediately.  He was confident, charismatic, humble, determined and a natural born leader. However, as  he stated in his SMASH admission essay, at the age of fifteen he was “only just coming into  that stage of self-awareness, that evolutionary period of our lives that either defines us or  destroys us.”

He knew he was creative and curious, able to work hard, and interested in engineering and  technology.  But he also knew there was so much he did not know and wanted to learn. That  realization was one of the main reasons he applied to SMASH – he wanted to take  advantage of opportunities that allowed him to pursue his interest in engineering and  technology. An interest sparked when he learned about mythological Greek inventor  Daedalus. Haki was also one of the few SMASH scholars versed in social justice.

At a very young age, his parents took him to lectures by Dr. Kwaku Person –Lynn, Dr. Joy  Leary and others. Additionally, he became a part of Zebrah Smacks, a nonprofit performing  arts group that raised approximately $60,000 to build an orphanage and school in Ethiopia, a school in Haiti and provide relief for Hurricane Sandy. As he progressed through his three years with the SMASH Academy, Haki transformed from a young man who did not fully understand the responsibilities of being a leader to a rising twelfth grader who understood the impact of his actions on fellow scholars [who looked up to him]. They looked to him as a social justice leader and accomplished scholar.

Haki excelled in SMASH’s math, science, engineering and computer science classes. But it was the computer science class that challenged him most. He would spend hours trying to debug code. During his senior year, he also participated in the AP Computer Science Saturday class to prepare to take the AP CS exam. All his hard work has paid off. This past June, Haki Daniels graduated for the Los Angeles Center for Enriched Studies. Today, he is enrolled at San Diego State University majoring in Computer Science.