Oakland, CA (June 20, 2017) – The Level Playing Field Institute (LPFI) announced today that AT&T will serve as a national sponsor for the expansion of LPFI’s signature program, the Summer Math and Science Honors (SMASH) Academy. AT&T has served as a leading sponsor of SMASH for the past three years, contributing $500,000 to support SMASH programs in California and the expansion of the program to deepen its impact nationally. 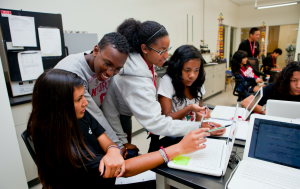 SMASH is recognized as one of the country’s most effective educational models in helping low-income high school students of color pursue and persist in STEM fields in college and career. US News and World Report has called the SMASH Academy “perhaps the most ambitious program to encourage African American and Latino students in STEM fields.” This three-year program provides rigorous STEM course studies, college prep courses, and access to STEM role models and peers. A hallmark of the program is its five-week summer residential program where students have an opportunity to live and study on the campuses of one of LPFI’s partner universities, including UC Berkeley, Stanford University and UCLA.

“We want all students — regardless of race, gender or income — to achieve their dreams,” said Nicole Anderson, Assistant Vice President, Social Innovation at AT&T. “LPFI’s SMASH Academy will equip underrepresented students with the STEM skills needed to thrive in today’s and tomorrow’s workforce.”

In 2014, LPFI embarked on a campaign to deepen its impact in California and to expand to communities around the country. The first SMASH site to open through the expansion was UC Davis–a largely Hispanic Serving Institution– in 2016. SMASH at Morehouse College in Atlanta launches this summer, and plans to launch a SMASH site in collaboration with Wayne State University in Detroit are slated for 2018.  As part of this ambitious expansion campaign, the LPFI has plans to open at least 3 additional SMASH programs in communities across the nation by 2020.

“AT&T’s investment in the talent in low-income communities through SMASH shows that they are committed to closing the equity gap in STEM,” said Level Playing Field Institute CEO, Eli Kennedy. “The SMASH model is proven to move the needle towards a more diverse and inclusive STEM space and AT&T will help us strengthen the pipeline from these communities.”

Founded in 2001 by Freada Kapor Klein, Level Playing Field Institute (https://www.smash.org) is committed to eliminating the barriers faced by underrepresented people of color in science, technology, engineering and math (STEM) and fostering their untapped talent for the advancement of our nation.