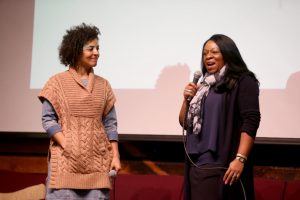 Danielle Rose, of Level Playing Field Institute, left, and Toni Vanwinkle, of Adobe, speak during a panel discussion hosted by the National Society of Black Engineers at Impact Hub in Oakland, Calif., on Thursday, Feb. 2, 2017. Hidden Figures cast member Karan Kendrick among other was one of the panelists who spoke, too. The film is based on the story of three African-American women working at NASA in the early 1960s. (Ray Chavez/Bay Area News Group)

The movie tells the story of Katherine G. Johnson, Dorothy Vaughan and Mary Jackson, African-American women working at NASA who served as some of the brains behind John Glenn’s historic orbit of Earth in 1962.

And similar film screenings and forums are being held throughout the country, with high hopes that the film will galvanize interest in science, technology, engineering and mathematics — also known as STEM — in minority girls and boys….

Jennifer R. Cohen, site director of SMASH Berkeley, which is a free Summer Math and Science Honors Academy at UC Berkeley offered to underrepresented high school students of color, said her nonprofit has also been hosting screenings of the film, and it’s been inspiring to see young people’s response.

“They were saying we didn’t even know this was a part of history and part of space exploration. This has been a story of national pride, for many black women,” she said.