Today, across the nation, tens of thousands of students will take the Advanced Placement Computer Science (AP CS) exam with dreams of pursuing computing careers. This exam is a critical step in the path toward entering computer science as a field of study and a profession. One might expect that in California, home of Silicon Valley’s rapidly-expanding technology industry, just about every public high school would offer introductory and advanced computer science courses. Unfortunately, this is far from the case. 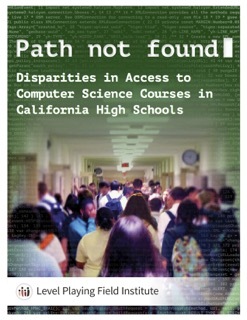 In a new report released today from the Level Playing Field Institute, not only are computer science courses offered at surprisingly low rates throughout California’s public high schools, the coursework is particularly out of reach for African-American and Latino students, low-income students, and English language learners.

The report, Path Not Found: Disparities in Computer Science Course Access in California High Schools, illustrates the disconcerting statistic that California public high schools with the highest populations of underrepresented students of color are half as likely to offer computer science courses than schools largely composed of White and Asian students (populations already disproportionately represented in the computing sector, as demonstrated in recently released diversity data from myriad technology firms).

Specifically, the report finds that in California public high schools:

Cumulatively, these findings suggest systemic barriers for students of color, low-income students, and English learners in accessing computing careers, which are among the highest-paying and fastest-growing occupations in the nation. Given the rising demand for skilled computer science professionals in California, it is vital that the state’s public schools provide all students with a solid foundation in computer science. With the rapidly changing racial landscape of the state and the nation, the lack of diversity within computing fields suggests there is a large pool of untapped talent which comprises a critical component of the future computing workforce. 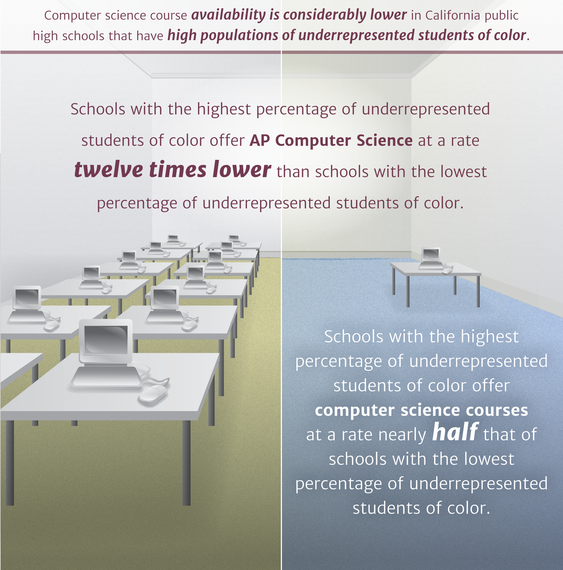 Research shows that diverse groups are associated with increased success and innovation, which not only impacts continued economic success of the technology industry but also has implications for creating innovative technological solutions to tackle real-world problems affecting all segments of society. Moreover, the underrepresentation of diverse groups within the technology industry greatly affects future economic opportunities for communities of color.

Level Playing Field Institute believes we can narrow these gaps of access and opportunity through comprehensive K-12 public education computer science funding strategies, teacher workforce development, and technology sector partnerships, as well as the development of programs designed to develop computing interest among underrepresented groups. By addressing disparities in access to computer science courses, more equitable pathways to the fastest-growing industries will be created, thus providing growth and sustainability opportunities for communities of color, the technology industry, and the nation’s economy.

All students deserve the chance to succeed in the 21st century workforce. Computer science instruction is now as foundational a part of preparing students for academic and workforce success as basic mathematics, reading, and writing instruction was a century ago. Equitable computer science course access is an investment in the future for all Californians.

(A repost from HuffingtonPost.com)